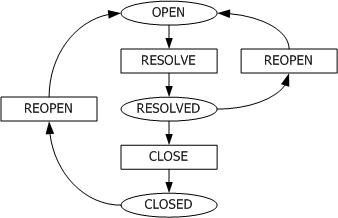 This means that the person who opened an issue, should finally close the issue, after having checked that the proposed fix from the maintainer fixes actually the original issue. I think, this is a very reasonable model [1].

However, in reality, we have in the OpenACS bug-tracker several hundred issues, which were resolved long ago, but where the person who entered originally the issue forgot to close the bug (or maybe was not aware about this duty).

My proposal is:
a) close all issues, which were resolved >2 years ago, which are still open
b) implement in the future some reminder system that send to the issuer an email to check the result and to close the issue when satisfied, and maybe one more one month later.

Is everybody fine with this?
-gn

2: Re: Closing issues in the OpenACS bug-tracker (response to 1)
Posted by Jeff Rogers on 01/18/21 10:00 PM
I'd guess "or maybe was not aware about this duty" is the case. It's not clear for the casual user that this expectation exists.

I think your proposed approach is fine. I would go a step further and send the reminder to the submitter after 2 weeks and then automatically close any "resolved" issues after a month if the submitter has not given any update. The option for the submitter to re-open still remains even after it was closed. This is very common among commercial software vendors, usually much faster than this (reminders after a day, auto-close after 3, but without the option to re-open. Yay commercial software.)

Having the resolver close the tickets is another path, but that adds an extra burden to the resolver, or feels very dismissive to the submitter if they feel the resolver was over-eager in closing the ticket.